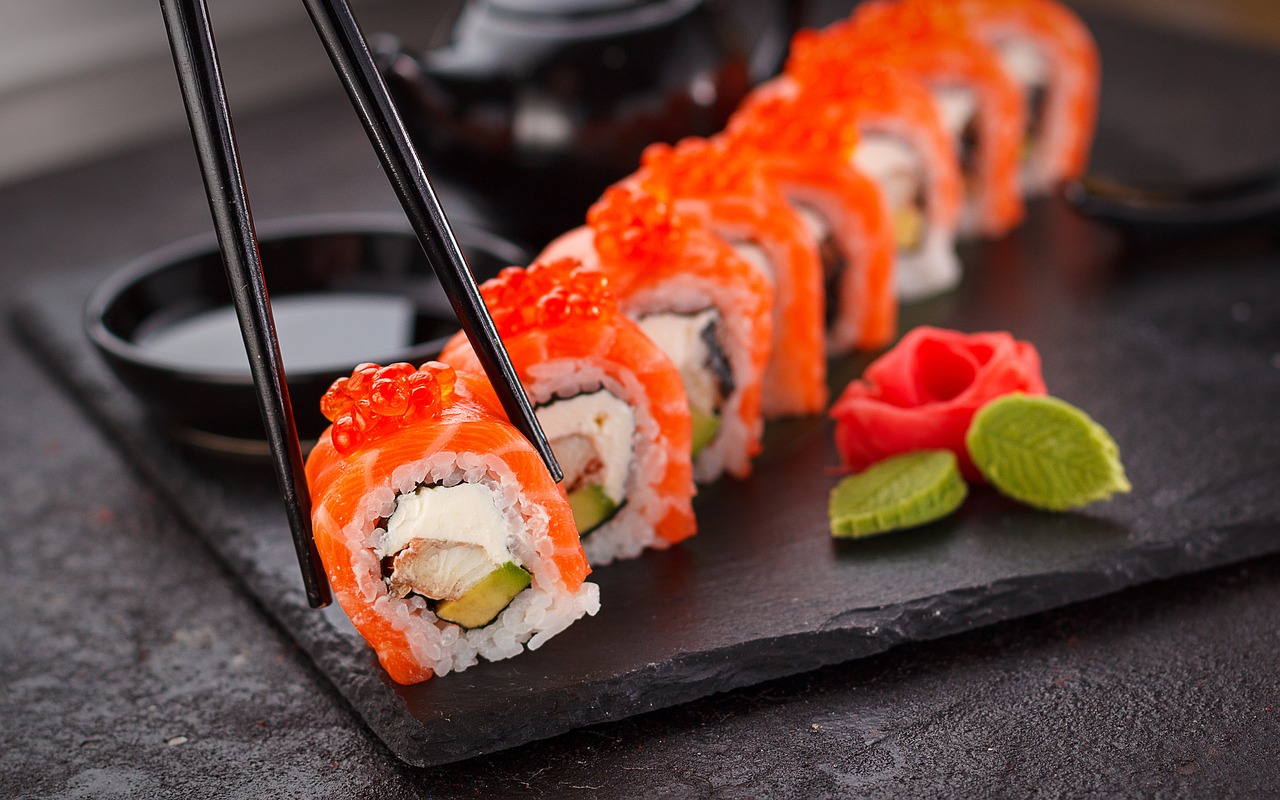 My husband loves and adores sushi. One of his favorite parts of our honeymoon (we went on a Celebrity cruise to Alaska!) was the daily all-you-can-eat sushi bar.
I had never tasted sushi until my husband and I started dating and he took me to his favorite sushi restaurant. The thought of eating raw fish or other seafood never really appealed to me. But, much to my surprise, I did in fact enjoy some of the sushi he selected. I did not enjoy it to the extent that I could claim loving it, but it was pleasant.
Naturally, since sushi is one of my husband’s favorite foods, I decided to investigate and learn how to {someday} master this culinary art. So here’s how this mini journey has gone thus far!
Terms and Tools
It is important to learn the terms and tools related to sushi so when you’re reading a recipe or how-to, you’re not utterly confused (like I was at first). Here are some basics:
The term sushi means “vinegared rice.” Many people think it means “raw fish;” however, sashimi means “raw fish.” Sushi as we know it can contain cooked meat or raw fish (sashimi) on or in it. 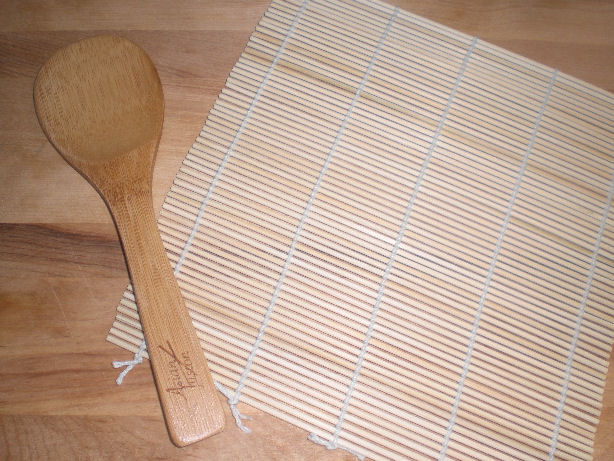 Types of Sushi
Meat Selection
Three of the most common types of meat (or sashimi) used for sushi are salmon, shrimp, and tuna. Some articles that I read here and there online said to purchase sushi-grade sashimi. However, after having a conversation with our local King Soopers seafood department, there technically is no such thing as sushi-grade sashimi. Basically, it is recommended that raw seafood be frozen prior to being eaten raw. The process of freezing kills the majority of bacteria (but not necessarily all of it) to make it safe for eating raw. The employee who helped us out at the King Soopers seafood department also mentioned that he could not tell us what to do with the salmon we purchased, he simply assured us that he could not guarantee it was safe for eating raw (which was a very wise way of watching their backs). All of the seafood in my King Soopers (since we’re located in the middle of the U.S.) is frozen then thawed before being placed in the display case. So it kinda-sorta is “sushi-grade.”
Try to use sashimi from a trusted source. Make sure it has been frozen prior to using it. And, just to cover my own back, what you do with the raw meat is your decision.
Rice Selection
Most recipes recommend using fancy especially-for-sushi rice. Basically, it is best to use short-grain white rice. I didn’t like the fact that most especially-for-sushi rice was so expensive; so, I looked for less-expensive short-grain rice. Short-grain rice was not available in my local supermarket, so I settled for medium-grain white rice and it worked just as well.
Before using the rice, be sure to rinse it until the water runs clear (as opposed to cloudly). To make the sticky rice for sushi, simply cook a batch of rice like you normally would. I cooked mine with a ratio of 1:2 (rice:water) in a microwave rice cooker. Then add sushi su (a vinegar mixture, see recipe below) to it. 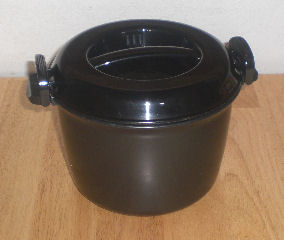 Sushi Su
Sushi rice is flavored with a su (vinegar) mixture. Here’s the sushi su recipe I used:
In a saucepan, boil these ingredients together until the sugar dissolves. And be warned, steaming vinegar burns your eyes and nose, so don’t get too close to it! Let it cool then slowly mix it into the rice until the rice is sticky and pliable. This is enough for about 3 cups prepared rice.
Makizushu
Here is one type of sushi I made. This is the kind with nori on the outside, then rice, veggies, and sashimi. 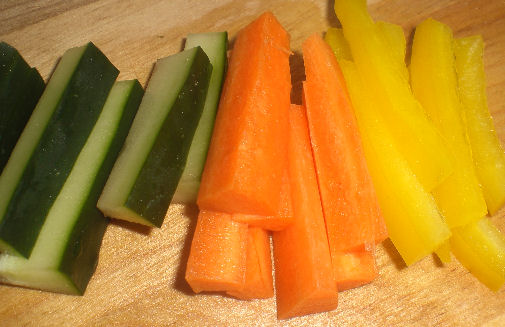 For our sushi, I julienned some cucumber (cut off the seeds and left on the peel), carrots, and yellow bell pepper. I selected these three veggies because of the variety of colors. 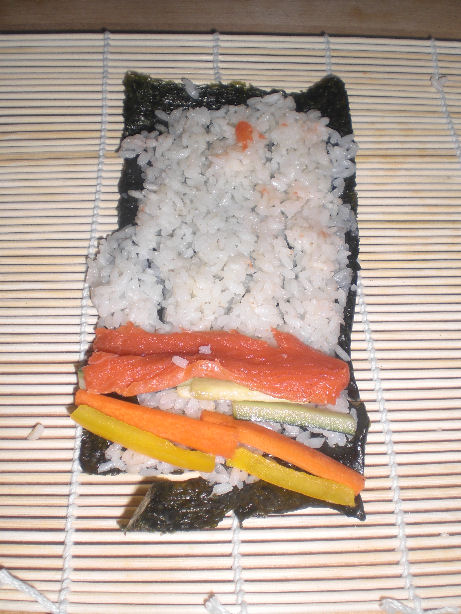 I laid a sheet of nori down on my makisu then I spread it with the sushi su. Next, I added some sashimi and some veggies. 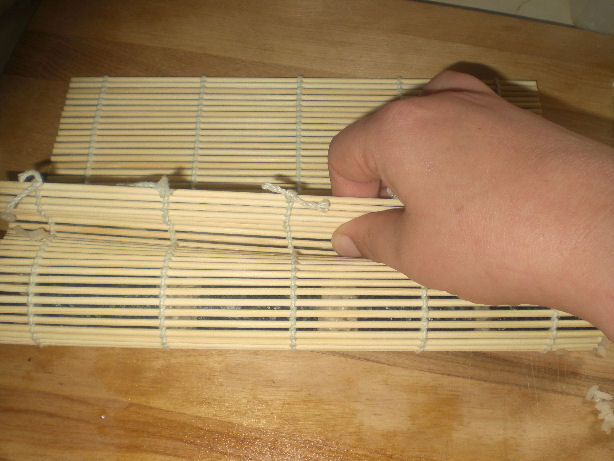 Then I rolled it up with the makisu. This took a little practice.

I then cut it into three rolls with a sharp knife. 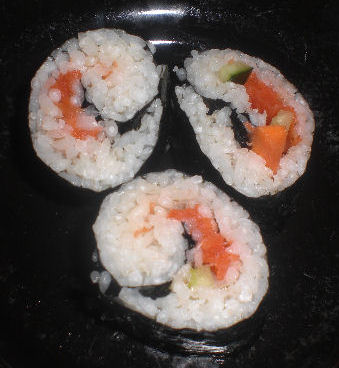 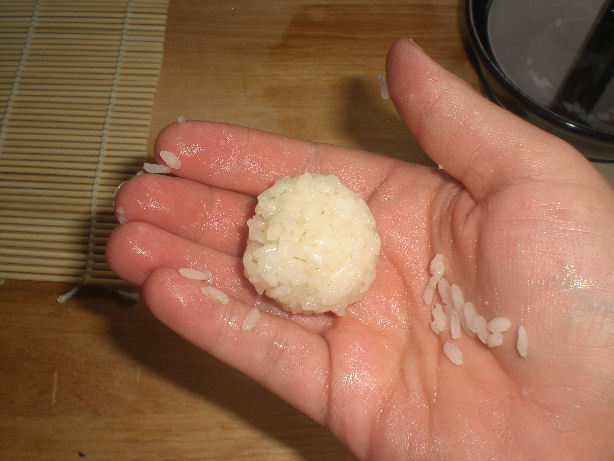 First, I dipped my hands in warm water (as recommended) to keep the rice from sticking too much to my hands. Then I rolled a golf-ball sized ball of sushi rice. 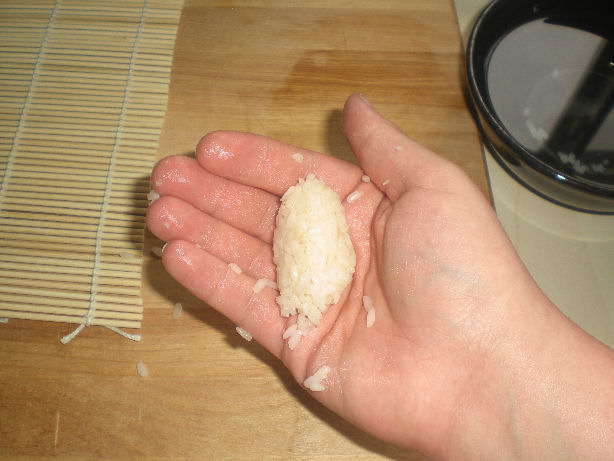 Then I squished it into a football shape. 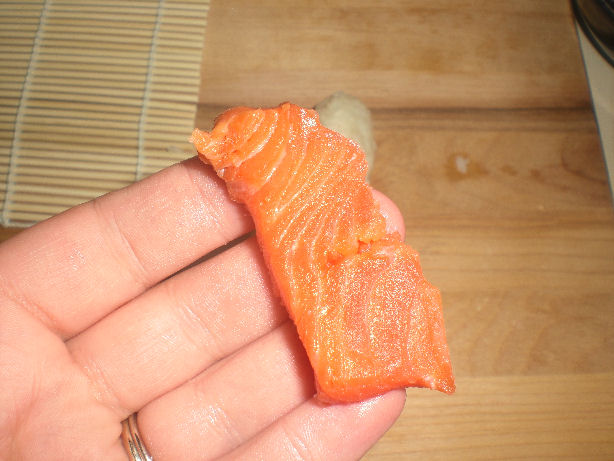 The sashimi (we used sake, or salmon) I cut into slices about 1/4-inch thick by about the same size as the football-shaped rice base. 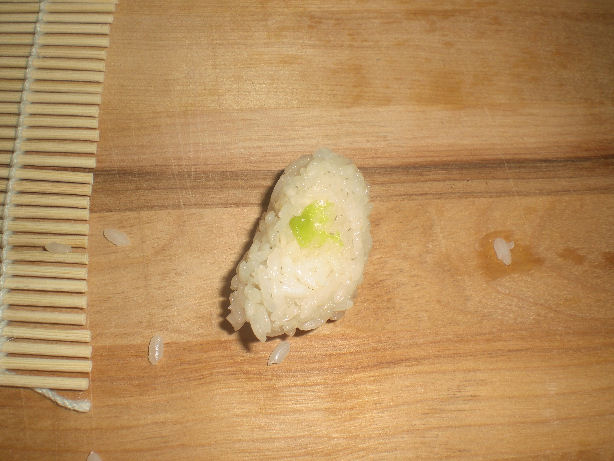 I put just a dot of wasabi paste to “glue” the sashimi to the top. 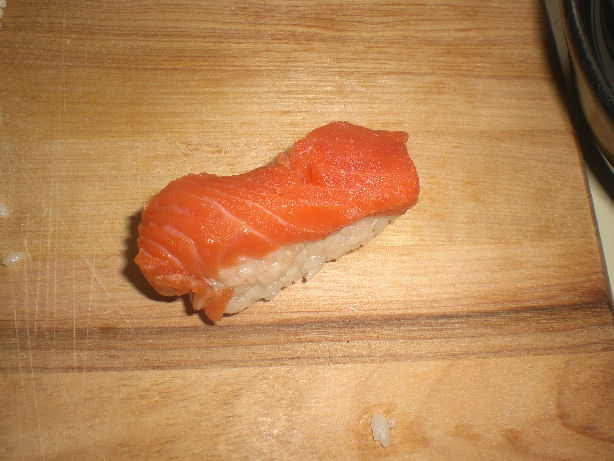 Then I stuck the sashimi to the top and squished it around in my palm a little more to make it look nice. 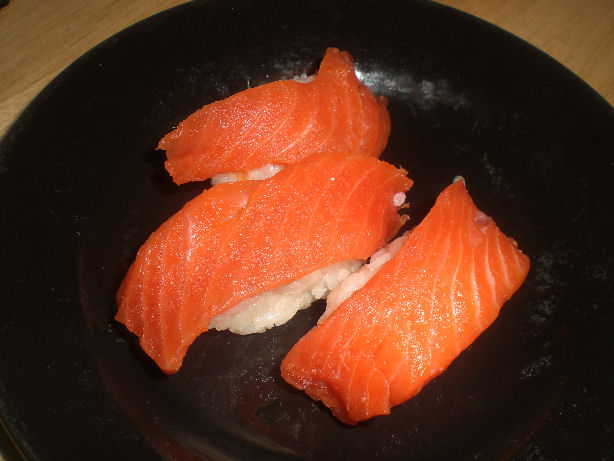 Conclusion
And those are my adventures thus far. I also intend to make California rolls one of these days. I’ll be sure to post about that too!